Mathematically, links are the realization of a collection of circles in three dimensional Euclidean space. They are often oriented, i.e. each circle is provided with a direction called its orientation and the spatial realization is called an oriented link. The orientation is biologically relevant, as the protein chains are oriented from the N- to C-terminus. At the coarsest level, links are classified by the number of circles, the number of components, with the case of a single circle being called a knot. As in the case of knots, the proper, mathematical link is defined only for the closed loops. The LinkProt database distinguishes between three kinds of loop-closing definitions, resulting in three link types, described in detail below:

The collections of links of n components are next separated according to the number of crossings that appear in a generic orthogonal projection of the given link to a two dimensional plane with the smallest number of crossings. A generic projection is one whose crossing information is unchanged under small changes of projection direction implying that there are no vertical tangencies in the components, there are no triple crossings and, the tangent directions at double crossings are not collinear. Such projections are called knot or link presentations. These minimal crossing presentations are factored into connected sums with those that cannot be further factored into non-trivial summands being designated as prime, or irreducible, knots or links. The classification of links is the unique (each topologically equivalent link, up to mirror reflection, appears exactly once) identification of prime links of n components ordered by the minimal number of crossings and, within the collection of fixed minimal crossing number presentations, with the alternating presentations (those in which the crossings alternate between over and under when traversing each individual component of the link) followed by those that are not alternating. Finally, within each subcollection, individual links are ordered according to historical practice, e.g. the Alexander-Briggs table, or, in more contemporary listings, according to a facet of their symbolic coding, e.g. the Dowker-Thistlethwaite code with the 'alphabetical' ordering.

For each n component link, there may be as many as 2n+1 oriented links varying by mirror reflection (and the chirality of the link) and the orientation of the individual components. The result is that the identification of an m crossing n-component link quickly becomes a very challenging problem. In practice, there are small series of steps that one can take to achieve this identification:

If a link is divided into k spatially separated families of sublinks, we determine the identity of the sublinks, Li, and show the entire link as the union of these sublinks, e.g. . Using these strategies, we have developed a table of link polynomials for those that have occurred in our studies. As new ones are encountered, we use these methods to identify them and add them to our tables. Moreover, each link is subsequently studied with the minimal surface analysis introduced in [3]. This analysis allows us to identify potentially biologically relevant residues.

in its original form is defined as a three-variable polynomial fullfiling the Skein relation [1]:

denotes the unknot (the trivial knot), and

knot or link diagrams differing in orientation of only one crossing as in the picture on the right hand side.

As from the definition the HOMFLY-PT polynomial is homogenous, it can be presented in the two-variable form. Different representations of HOMFLY polynomial are common. In LinkProt we use the relation

. Note, that in Mathematica the relation is

, while in katlas the relation is

. To calculate the HOMFLY-PT polynomial for a given closed loop we use the implementation of the polynomial of Ewing and Millet [4].

Chirality of knots and links

In mathematics and science, a structure or object is chiral if one can distinguish it from its mirror reflection as is the case for the left and right hands. One imagines the two hands placed palm to palm with an imaginary mirror between them indicating the result of a reflection. In the case of the mathematical study of knots and links, early researchers’ classifications did not distinguish between mirror reflections. Thus, the right and left handed trefoils where known simply as the trefoil. In contemporary mathematics and science, it is understood that the two trefoils are indeed different and, depending on the setting, one may be preferred over the other. Not all knots or links are chiral. For example, the Hopf link or the figure-eight knot are both examples of achiral structures, i.e. they are topologically indistinguishable from their mirror images.

As, for some purposes, the specific chiral structure is important while, in other cases, it is not important, we have included a feature that allows one to void the chiral distinction between structures and focus attention on other facets such as the number of components or the complexity as measured by crossing number or the topological type of the configuration. In particular, the user can choose to display only e.g. the Hopf link structures, regardless of the orientation of the components (see Search and browse database). Nevertheless, the statistics given on the bottom of the page include the chirality and orientation of molecules. To display the statistics regardless of the chirality, we provide the "Disregard chirality" button in the top of the page.

The chirality and sensitivity to orientation change splits the link topological classes into smaller subclasses. In particular, there are two Hopf links differing in the orientation only (Fig. 1). On the other hand some chiral links (like the Solomon link) need also to be distinguished from their mirror image (Fig. 2). In LinkProt, for each subclass arbitrary number is prescribed. Therefore, e.g. the Solomon link class is constituted by Solomon.1, Solomon.2, Solomon.3 and Solmon.4 subclasses (Fig. 2). In the main Search page only the main classes are presented, but clicking on the "Details" button allows to select also the desired subclasses (see Search and browse database). 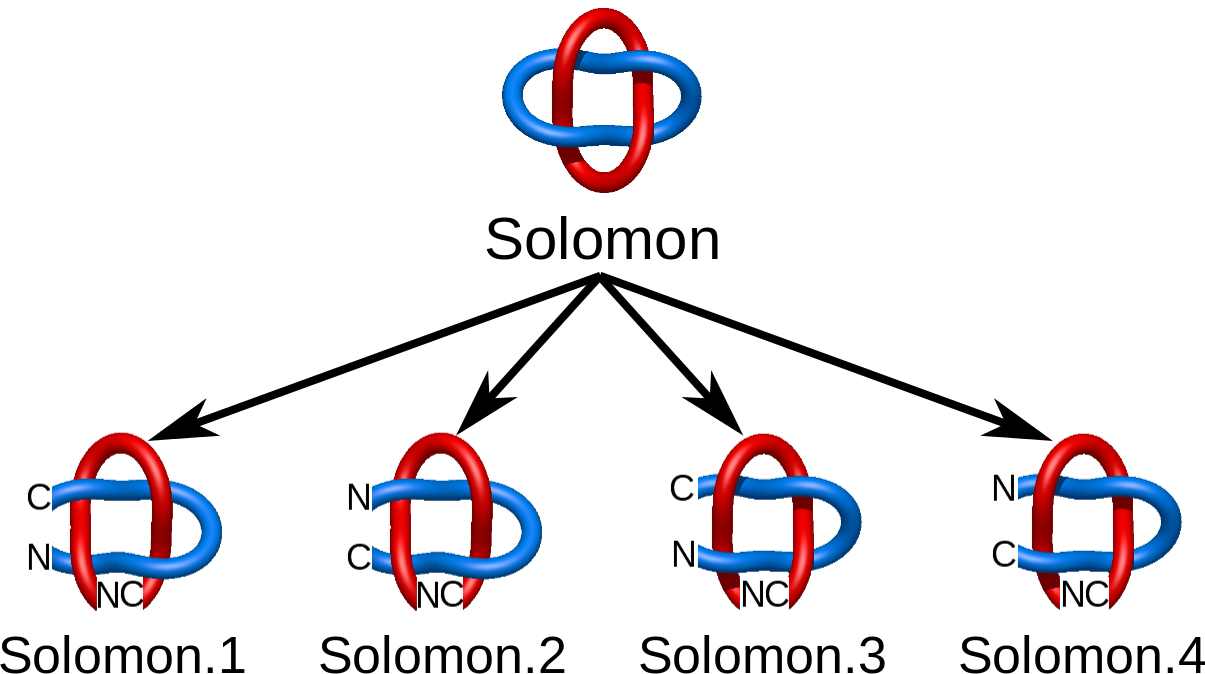 The minimal surface analysis follows the algorithm proposed in [2,3] and used in the LassoProt server and database. For each closed loop we prescribe the triangulation of a minimal surface, which allows us to define piercing through the loop. This is an alternative description of the linking, revealing potentially important residues from a biological perspective. The surface is constructed based on the positions of Cα atoms (the vertices), on which the initial mesh of triangles is built. Subsequently, the triangles are divided, swapped and optimized to achieve the triangulation with minimal area (Fig. 3). We should note however, that the surface obtained is the local area minimum, and there can be other surfaces with lower total area. However, this have not hindered our calculations for the entire RCSB database. 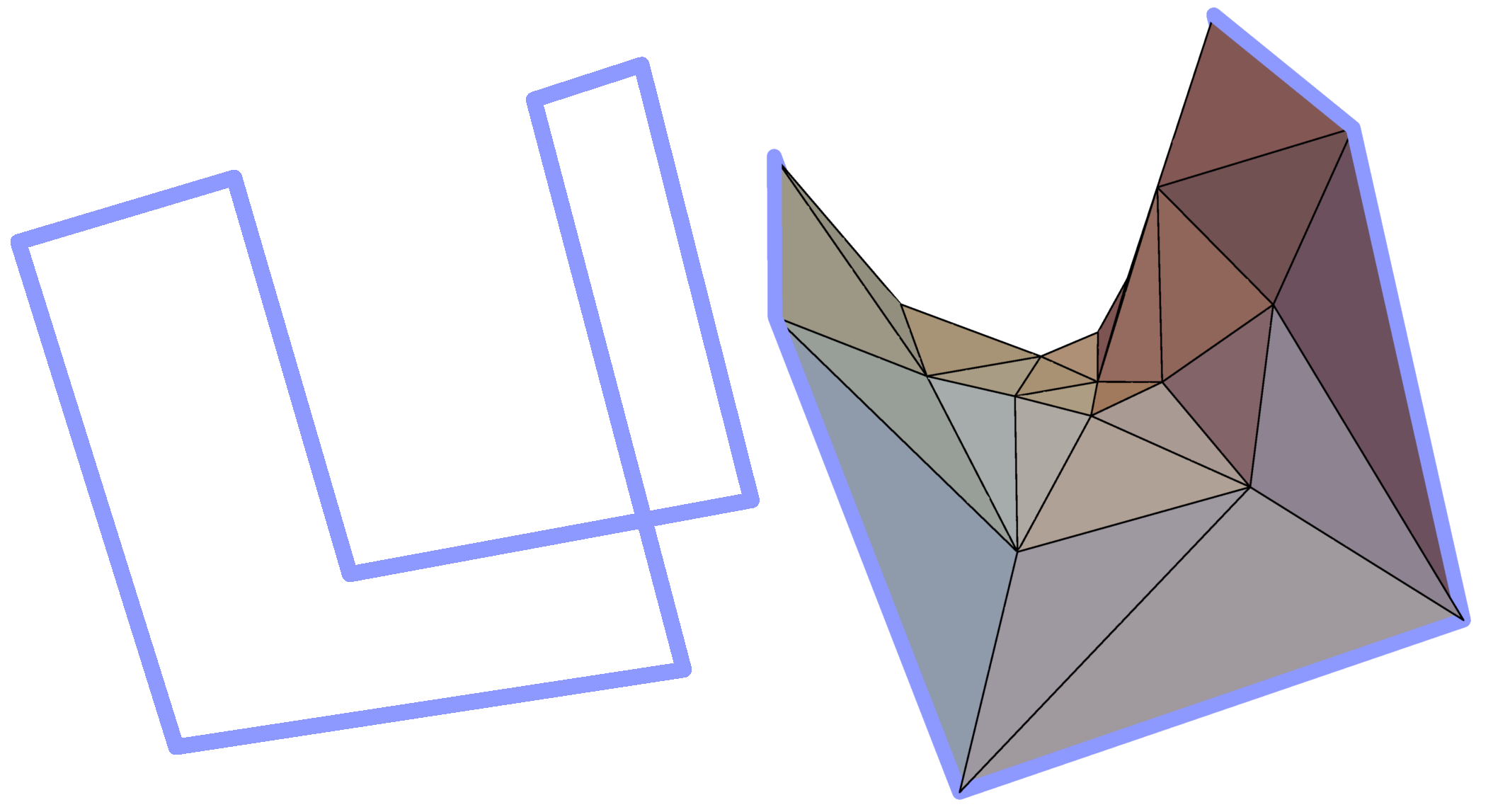 Fig. 3 Example of a simple polygon in three-dimensional space (left panel) and a triangulated minimal surface spanning it (right panel).

After spanning the minimal surface, the piercings through the surface are calculated. In each link the surface should be pierced at least once. Therefore the list of piercing serves on one hand as a double check of our link topology prescription and, on the other reveals the exact residues piercing the surface. These residues are usually in the closest proximity to the loop, therefore can interact with the loop, and hence can be biologically relevant for the function of the protein. The surfaces are displayed in the main view of the protein link (Fig. 4).

Probabilistic links arise in multichain models upon joining the termini of each chain. Similar technique was introduced earlier to define the knots in proteins, however in that case the termini of only one chain were joined [5]. There are a few techniques, how the termini could be joined. The simple method to connect the termini directly can introduce additional crossing of the chain in its projection on 2D plane, changing artificially its link type. Therefore the termini are expanded towards the large sphere and then joined on the sphere (Fig. 5). In general, the type of the link depends on the direction of expansion. Therefore one can talk about the probability of obtaining a link in the set of all possible closures. The probability of each link is depicted as a circle plot in the default view of each protein (see Search and browse database).

The third type of links stored in the LinkProt database are the macromolecular links. In such cases, the components of the link are formed by several chains, not by one chain, or part of the chain as it was in probabilistic or deterministic links. In such a case the components are formed either by connecting the chains' termini with straight interval, or by the covalent link between the chains. Macromolecular links often arise in bacteriophages or in virus capsids, introducing additional stabilization of the whole structure (see Application section).